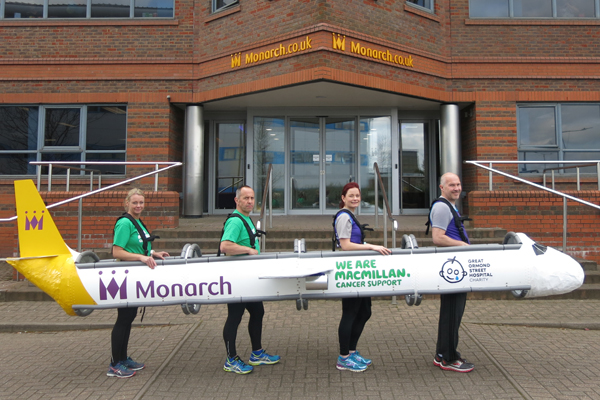 Manchester-based Monarch crew will attempt to break the Guinness World Record for the ‘fastest marathon in a four person costume’ at next weekend’s London Marathon.

A custom-made Monarch ‘aircraft’ was built by apprentices from Monarch Aircraft Engineering specifically for the world record attempt. It is 5m 35cm long, weighs 21kg and is made of lightweight aluminium.

Leading the team is captain Simon Gauge, Virgin Money’s second highest individual marathon fundraiser in 2016 and the man behind the idea.

He is running along with cabin crew Caroline Brown from Altrincham, cabin crew manager Jacq Jones and captain Steve Day.

Gauge said: “Between us we have 58 years of experience flying for Monarch, but it’s fair to say we never thought we would be crewing a plane quite like this one or attempting a Guinness World Record.

“Training has included regular runs with 5kg backpacks to prepare our bodies for the weight of the aircraft.

“Needless to say, it’s been challenging fitting preparation in around our flying schedules and our regular 4am starts but we are confident we can beat the current record of 5:25:02.”

Pauline Prow, chair of the Monarch Foundation, said: “We are so proud of all the staff who are running the London Marathon and raising money for Monarch Foundation charity partners, GOSH Charity and Macmillan Cancer Support.

“The runners have worked closely with our engineering apprentices who built the aircraft and have trained so hard to ensure everything is ready for a smooth take-off. It’s been a great team effort.

“The possibility of breaking a Guinness World Record is really exciting and we will be proudly watching and cheering for all our runners on the day.”

Hale and Altrincham Life wish the team all the best for the run!