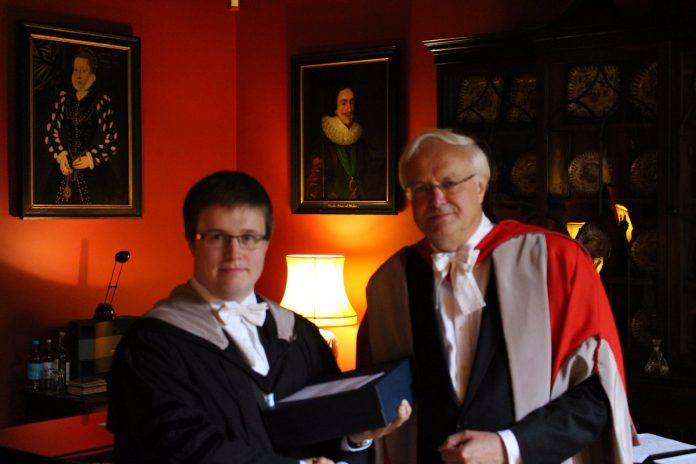 Hale’s Theo Sharrock, has been officially recognised as an “exceptional student” by Cambridge University’s St John’s College, which has this week honoured him with the Larmor Award.

At the same time, Salford’s Bishop John Arnold has accepted Theo’s application to begin studies towards the Catholic Priesthood in the Diocese of Salford and has asked him to study at the Venerable English College in Rome.

“It’s been quite a week,” said 22-year-old Theo who graduated with a first-class BA Hons and MSci in Natural Sciences. He said: “It is a massive honour to receive this award from St John’s alongside such talented students, and it is a wonderful way to finish my time here in Cambridge and to begin my new life training to serve the people of God in Salford.”

“I’m truly thankful to both St Bede’s College, Manchester and St John’s College, Cambridge for my education for the past 11 years: it’s helped shape me to this point and has brought me closer to God and to the knowledge of how He wants me to spend my life.”

The unique Larmor prize, named after the 20th century physicist and mathematician, Sir Joseph Larmor who was a student and Fellow of St John’s College, recognises “intellectual qualifications, moral conduct or practical activities” and is awarded for “all round excellence.”

The St John’s College website said that Theo’s outstanding academic record, including his consistent run of first class results in exams and an assortment of scholarships and College prizes, led his tutor to describe him as “one of the finest students throughout his time here.”

Actively involved in University life, Theo played cricket for his College, viola for the Cambridge University Musical Society Concert Orchestra, represented Cambridge at trampolining, and was treasurer of the Fisher Society (the University’s Catholic Chaplaincy)

From school pilgrimages to Lourdes with St Bede’s College, Manchester, Theo has continued to support disabled and disadvantaged people visiting Lourdes for the past six years with the Diocese of Salford and regularly acts as mentor to St Bede’s College pupils on their first pilgrimage. He has also been actively involved in the Hosanna House and Children’s Pilgrimage Trust Group 104, taking three groups of special needs children to Lourdes.

“He is a remarkable young man – multi-talented and compassionate. We will keep Theo, and all those joining the seminary this year, in our prayers as they begin their studies toward the priesthood.”

Former Recipients of this prestigious award: