It is estimated that up to 630,000 people are Coeliac in the UK but only 23% of them diagnosed. That’s approaching half a million people walking around who are potentially destroying their digestive tracts with the dreaded disease. It is estimated that 15% or 4 million UK households follow a gluten-free diet. That’s over 8 million people who are either Coeliac, are gluten intolerant or simply feel better when they don’t include it in their diet. At the bottom of this page is my story – what eating and drinking gluten does to me – please join our new H&A Allergy Free group if you also suffer and would like to read about where is safe to eat & drink in the Altrincham area! https://www.facebook.com/groups/HandAallergyfree/

Pubs and Bars In Altrincham Who Serve Gluten Free Beer!

There are three great bars in Altrincham that serve gluten-free beer. Yes, I could go out with my friends and drink wine, but beer’s better. These are the ones we know about – suggest others and we will add them! 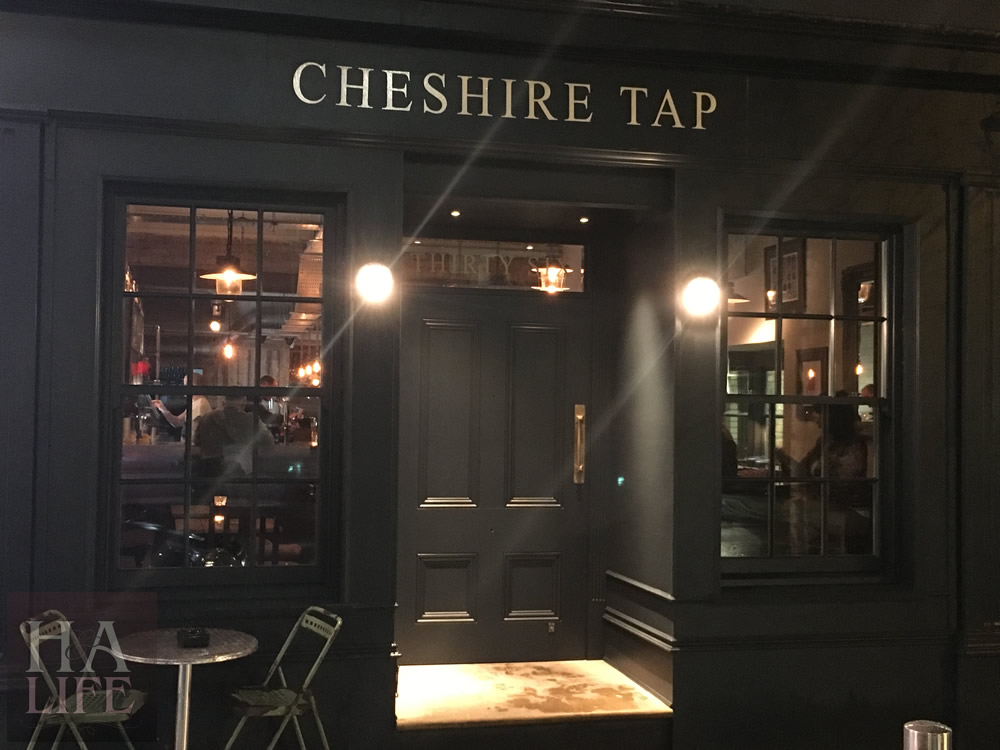 We have written about this cracking bar on the corner of King’s Court before. Cool industrial downlighters and a long bar serving wines and beers. Even better they have a great selection of gluten-free beer! I spoke with the barman and he laid them all out for me:

These are the beers on offer: 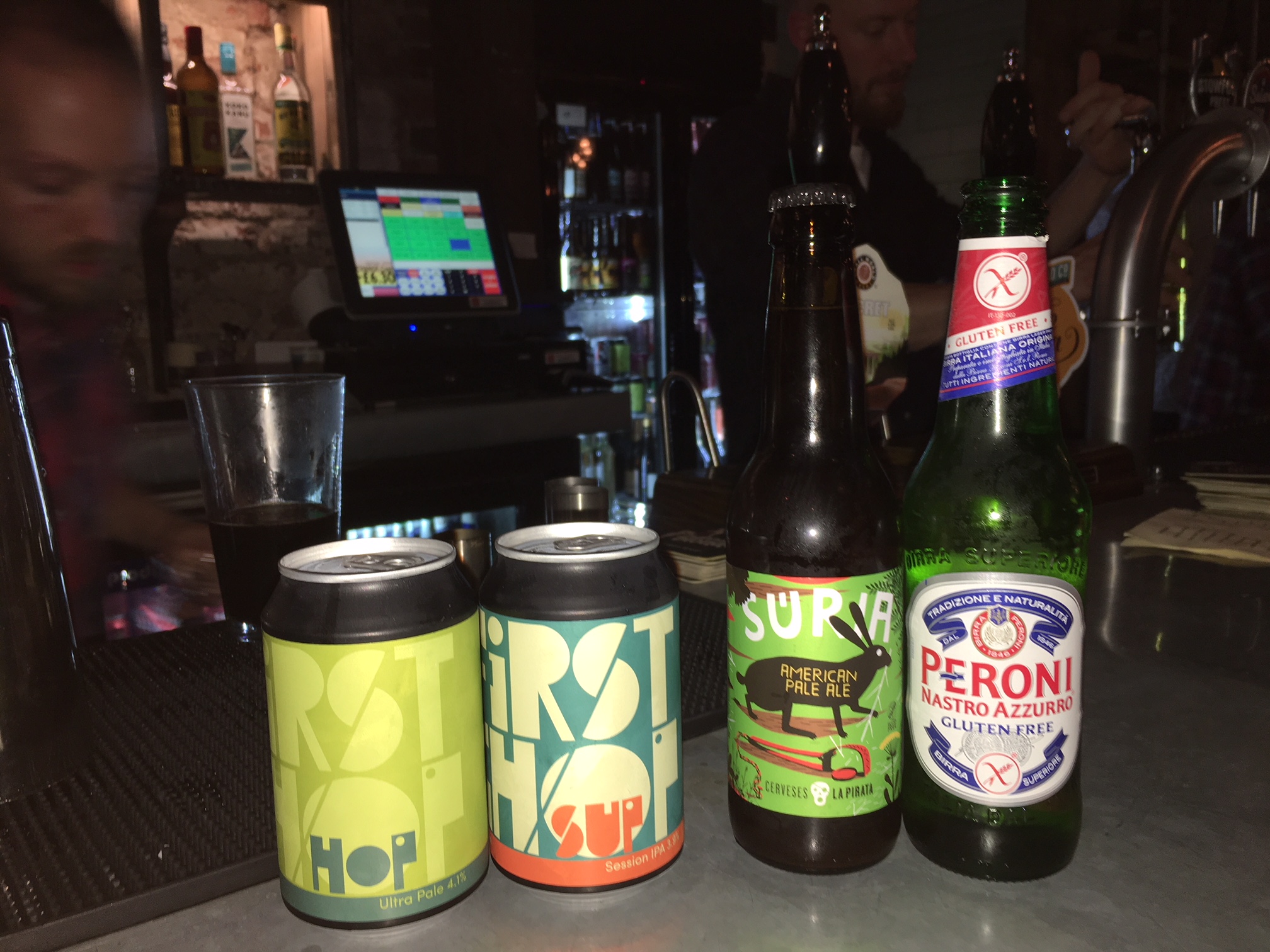 Made in Eccles of all places this microbrewery now makes 20,000 litres of Gluten Free beer a week. Their site is here and you can buy it online. The ones here care in small cans but it is also available in 330cl bottles. The two on offer here are:

5.0% Made in Catalonia in Spain this is an American Style pale ale.

I didn’t tase all these beer but what I can tell you is that it would be a challenge to notice the difference between these and normal pale ale and pils. For me this is the best place in Altrincham for Gluten Free beer. They also sell Daura but I will cover that further down. 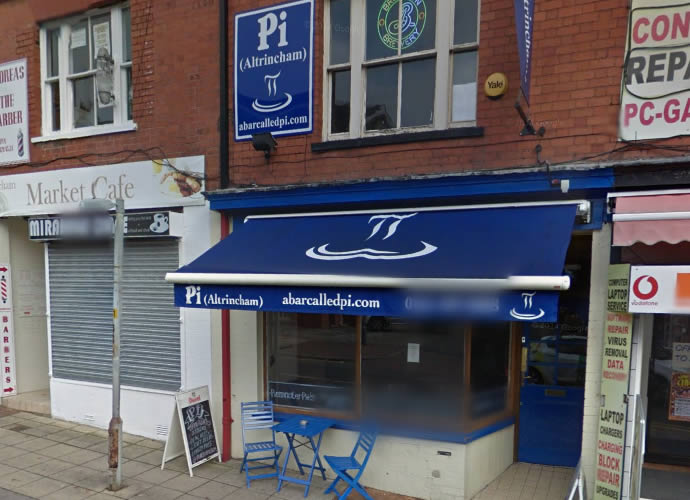 Great bar on Shaw’s Road just opposite the end of Greenwood Street and very close to the market. They have also just opened in Chorlton.
The bar sells Brewdog Gluten Free beer. The brewery is Scotland’s largest independent and they make Pale Ale.

They also sell a Gluten Free lager but they did not have that in stock when I asked.

My local for many years the Railway is a truly great pub and one which retains its heritage remaining virtually unchanged in 40 years. I convinced proprietor Alan Hough to stock gluten-free beer as I had had enough drinking cider on a Friday night. Thankfully he obliged and now sells the wonderful Daura. This beer is made by Estrella.

5.4 % The original and the best in my opinion and the world’s most award-winning beer, it was developed in 2006.

Alan is now replacing this with Peroni (See above) as it is easier for him to source from the brewery.

There is now no need to suffer in silence. For a start, if you suffer from Gluten intolerance I know what you are going through. It’s difficult and some people would rather mock than believe you. I hope I have dispelled a few myths about being gluten-free. I also hope that some of the other pubs and bars around Altrincham read this because the more that sell it, for me, the better. If indeed 6% of households are living a gluten-free lifestyle as research suggests read below – then that is a huge number of people you can’t serve. they will go elsewhere. I do.

If other bars and pubs I have been missed in my mini-survey of Altrincham and Hale and you do sell Gluten Free beer then I will be happy to add you to this list.

My Experience of being Gluten Free

Coeliac sufferers have an autoimmune disease where gluten causes their immune systems to attack their own bodies. The protein destroys the delicate linings of their intestines causing painful symptoms and can lead to malnutrition and serious complications in some cases.

With 6% of the UK population (3.7m) now claiming gluten intolerance, most supermarkets have a gluten-free section where special bread and other foodstuffs can be bought. A recent BBC study tested 60 volunteers and the conclusion was “overall, they reported significantly more gut symptoms in the fortnight that each was given gluten compared with the weeks when they were truly gluten-free”. Yet those who do not suffer often mock the afflicted.

As someone who suffers from gluten intolerance, I have to be very careful what I eat as my symptoms are quite extreme. I have been tested for Coeliac but thankfully I do not have it. However, if I eat the slightest bit food containing gluten then I can tell you within an hour because of the symptoms. So what does it do to me?

My Symptoms Of Gluten Intolerance

After an hour or so of eating food containing gluten levels of flatulence are enough to clear a small semi, never mind a restaurant or a pub! I end up standing outside! My stomach expands way beyond normal proportions and I literally look pregnant. I am not particularly fat but the increase is staggering. This carries on through the evening even while in bed, which isn’t very pleasant for my wife!

Sleep is way off as ‘bombs’ explode in my lower gut and then there’s an urgency to pass wind. The whole episode lasts until around 3.30am when I finally go to the toilet and after that all is OK. Next day I am exhausted, can’t think clearly and stay overtired for at least a day.

I found out 10 years ago. My symptoms were getting worse and I was travelling in Taiwan. I visited Taichung and we went to the same Japanese restaurant every day. I ate a lot of Sushi and rise. My symptoms stopped completely! After the week I was there I came home and ditched the gluten. I get caught out occasionally by stupid restaurants who just don’t take care, but generally, I am a lot better as my wife doesn’t use wheat flour, traditional soy sauce or anything else that might contain gluten. (A lot of products do and we are always reading the ingredients on what we buy!)

If I drink normal beer then the whole of the next day is spent inside, near a toilet – I think 8 times is the record!

So why am I telling you all this? Well, to dispel the naysayers and those that think it’s just a fad. It isn’t. I also don’t want people quizzing me about it over dinner, I don’t want to be a topic of conversation, it is what it is! I am also allergic to eggs (projectile vomit) and Cheese (slow vomit!) so I’m really fun to live with!