There is growing anger among users of Goose Green Multi Storey in Altrincham after a spate of PCNs have been sent out by Smart parking. Smart operate the car park on behalf of the landlord. Many of the recipients had parked quite legitimately with receipts from the ticket machine, yet the tone of the notice is harrowing and in one instance reported to us  by Jane Worrell after her son was sent 5 PCNs in a row:

“My son is only 19 and it is causing him a lot of stress. Luckily he is organised and has all his parking tickets to hand”

Jane’s son received 5 tickets! Each one with a demand of £100 which would reduce to £60 if paid within 14 days. That was a total bill of between £300 and £500! Jane’s son had purchased a ticket for each and every one of his visits.

We wrote to Smart earlier this week for a statement but so far they have refused to comment. We will publish a reply if we get one.

The car park services Total Fitness on the upper floor and many gym members are up in arms. One member who did not wish to be named said:

“It’s outrageous, I received 2 parking tickets from them and just thought ‘Oh well I must have forgotten to get a ticket. A couple of days later I was rummaging in my sports bag and there they were, large as life! I’m furious that Smart Parking have tried to extort money from me in this way and will be writing to them.” 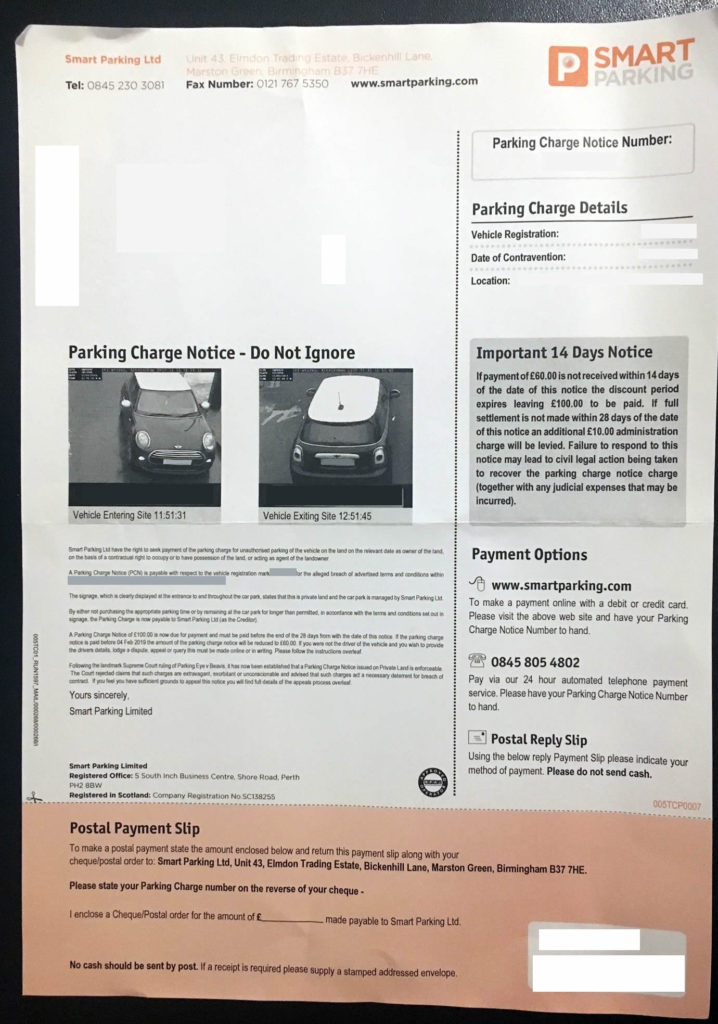 The ‘PCNs’ like the one on the right are issued by Smart, an Australian company operating from Birmingham in the UK. They are supposed to be issued if the company believes that the driver of a vehicle using its car park has either not purchased a ticket or if they have gone over their allotted time with purchasing a further ticket.

The first thing to understand is that the PCNs issued are not actually Parking Charge Notices in the traditional sense. Those are issued by the local authority such as Trafford council and are generally affixed to the windscreen of your car with a strict period in which to pay.

The paperwork issued by Smart is simply an invoice. As it states in the first paragraph:

“Smart parking Ltd have the right to seek payment of the parking charge for unauthorised parking by the of the vehicle on the land on the relevant date as owner of the land, on the basis of a contractual right to occupy or have possession of the land, or acting as agent of the landowner”

**If you are in possession of a ticket then simply write back to smart enclosing a photocopy or photocopies of your ticket. The case will be dropped immediately.

What If I Have Lost My Ticket?

If you do not have a ticket then you must be very careful NOT to declare that you were the driver of the vehicle. In the case of Total Fitness, the parking is free for two hours and many believe that because of this they do not need to acquire a ticket. In contract law, each contract requires that the recipient of a product or service provides what is known as  ‘consideration’. If there is a fee then consideration is the purchase of a ticket from the ticket machine (i.e.e giving them money). When parking is free it is the act of acquiring the ticket i.e. ‘doing something’ that acts as consideration.

When no ticket is purchased then Smart go after the owner of the vehicle in order to request payment. They believe they know when a driver entered the car park and for how long because of the ANPR camera at the entrance & exit. They then match the number plate up with the one entered into the machine and, after acquiring the address of the keeper from DVLA, write to the keeper requesting payment.

Details of how to successfully win EVERY TIME are on the Money Expert Website: Parking Tickets, Fines & Parking Forum thread.

Template For Winning The Appeal

The way to get the invoice cancelled is to fill in the online appeal form with:

I dispute your ‘parking charge’, as the keeper of the vehicle. I deny any liability or contractual agreement and I will be making a formal complaint about your predatory conduct to your client landowner and to my MP.

There will be no admissions as to who was driving and no assumptions can be drawn. Since your PCN is a vague template, I require ALL photos taken and an explanation of the allegation and your evidence, i.e.:

– If the allegation concerns a PDT machine, the data supplied in response to this appeal must include the record of payments made – showing partial VRNs – and an explanation of the reason for the PCN, because your Notice does not explain it.

– If the allegation involves an alleged overstay of minutes, your evidence must include the actual grace period agreed by the landowner. If you fail to evidence the actual grace period that applies at this site or suggest that only one period applies, this will be disregarded as an attempt to mislead. In the absence of evidence, it will be reasonably taken to be a minimum of twenty minutes (ten on arrival and ten after parking time) in accordance with the official BPA article by Kelvin Reynolds about ‘observation periods’ on arrival being additional and separate to a ‘grace period’ at the end.

– in all cases, you must include a close up actual photograph of the sign you contend was at the location on the material date.

Formal note:
Should you later pursue this charge by way of litigation, note that service of any legal documents by email is expressly disallowed and you are not entitled to assume that the data in this dispute/appeal remains the current address for service in the future.

THE NAME AND POSTAL ADDRESS OF THE KEEPER (OR THE HIRER/LESSEE) GOES HERE.

THE DRIVER IS NOT IDENTIFIED.

DO NOT PUT YOUR NAME HERE INSTEAD, IF YOU ARE NOT THE KEEPER/HIRER/LESSEE. YOU ARE NOT HELPING IF YOU DO THIS WRONGLY BY APPEALING IN THE WRONG NAME!

DON’T POST IT BY ROYAL MAIL UNLESS YOU HAVE NO OTHER OPTION ON THE PCN. CERTAINLY NOT BY RECORDED DELIVERY – FORGET THAT! – ALWAYS USE THE ONLINE APPEAL PAGE – OR EMAIL IF OFFERED AS AN OPTION ON THE NOTICE – BECAUSE THE APPEAL CANNOT GET LOST AND YOU CAN KEEP PROOF/ A SCREENSHOT. NO NEED TO USE YOUR REAL SIGNATURE IF YOU HAVE NO OTHER APPEAL OPTION BUT POSTAL…BUT OF COURSE YOU PUT YOUR NAME AND ADDRESS!

What If It Is A Company Car Or Hire Car?

In the case of a company car or hire car, if you get a windscreen ticket you MUST appeal before day 28 (well before day 21 when it’s an IPC firm which only ‘offers’ 21 days to appeal – check the PCN). This is in order to hook the PPC in your direction, before they get a chance to get the keeper’s details from the DVLA.

You should also warn the owner/keeper (Fleet Manager) not to pay if they do get a letter about it because they have no business to get involved in a fake PCN you have already appealed as driver, and you won’t reimburse them if they are daft enough to pay it.

If the hire/lease co gets a postal PCN and names you as the driver/hirer, that is a good thing as it removes them from the loop entirely and then you can follow the above advice as appropriate to your case – but check and see if they have charged an admin fee. Challenge that admin fee with the Fleet Manager, Hire firm or your HR Manager, if your car use t&cs do not support this deduction for a mere invoice (as opposed to a fine/penalty).

Here are some examples of a successful first appeal. These examples relate to a situation where the PPC has (pretty much ALWAYS!) failed to send the required documents to the hirer (you) with the postal Notice, by day 21 after the date they were informed of the hirer’s details:

What If I Already Told Them I Was Driving?

OK, you were doing your public duty and you thought that Smart would be fair and listen to the fact you lost your ticket. Maybe you even went to the gym and got the evidence you were there! Whatever, if you cannot find your ticket and have already admitted to driving then you must jump through a few more hoops to get your ticket cancelled but in 99% of cases, you will win. They will not listen! They do not care whether you lost your ticket – If you don’t have one and lose the first appeal because you told them who was driving your case will be sent to POPL.

Do Not Tell Them Who The Driver Was!

You will receive a POPL number and you will need to appeal through them. If you do this correctly you will win!

If you diligently follow the instructions on these pages you will not have to pay a penny. Of course we are not advocating breaking the law. We are not suggesting at all that you do not buy a ticket as that is not correct.

BUT if you do receive one of these letters – you do not have to pay.