There will be a series of full weekend A556 Road closures prior to the new road opening. This will allow the team to connect the new road to the existing network.

The roads that will be closed are as follows:

TIMES AND DATES Of The A556 Affected Road Closures

The closures will be in place from Friday at 9pm until 5am on Monday morning.

The anticipated dates are as follows:

They anticipate that the new road will be open to traffic by 5am on Monday 6 March before closing again for the weekend of Friday 10 March whilst barrier works are completed.

In addition there are two contingency weekends in the event of bad weather affecting works, these are

Traffic travelling between the M6 and M56 motorways will be diverted along the motorway network. Local traffic will be able to use the A50, Chapel Lane and Mereside Road.

They will also be removing the permanent traffic lights at Bucklow Hill junction and installing temporary lights in readiness for the de-trunking works. The traffic signal control pedestrian crossing facility at the junction will no longer be available.

They will also take the opportunity during these closures to do other advanced works in readiness for de-trunking Chester Road.

There is a requirement to install temporary traffic lights at Tabley and Millington link roads between the new A556 and Chester Rd. The lights will be removed as soon as the roundabouts are fully constructed.

They will make every effort to keep disruption to a minimum.

FULL MAP OF THE ROUTE 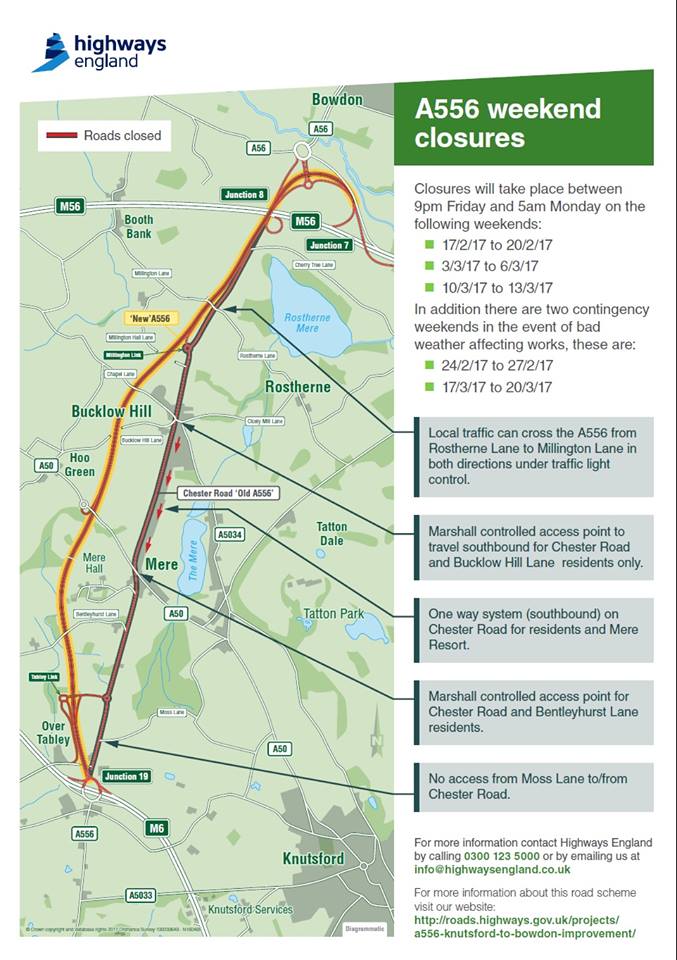