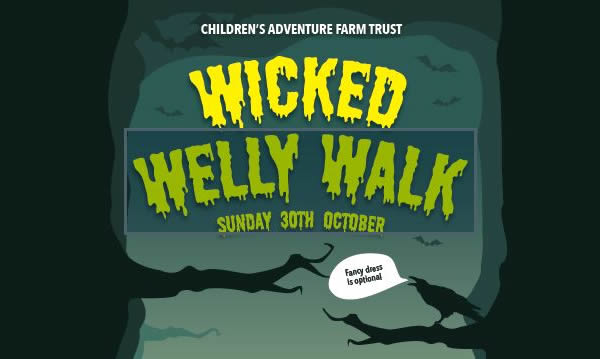 There Will be a ‘Wicked Welly Walk’ along the new route of the A556 from 10am-2pm on the 30th October with tickets costing £5. All the proceeds will go to The Children’s Adventure Farm Trust.

“As darkness falls across the land, the midnight hour is close at hand” What was the name of the record that famous line came from? Join us for the CAFT Halloween family walk along the A556 6.5k bypass be prepared to be trick and treated by grisly ghoul’s”

Take a look at the page that the environment agency have set up where you can buy tickets for the Wicked Welly Walk. According to the website the ground is being prepared and will take push-chairs. It is 6.5 km or about 4 Miles so it’ll take about an hour and a half. Let’s hope the weather is fine! 🙂

Many of you will already know there are huge improvements being constructed from Lymn roundabout all the way through to the M6 at Junction 19. This is being done to divert traffic from the A556 which is mostly at a standstill during the rush hour and incredibly busy at most times of the day.

The A56/A556 takes traffic from Manchester through Altrincham, and off the M56 through Bucklow Hill and Mere and onward to the M6 and of course off the M6 through Altrincham. The main reason that it gets so clogged up. The new motorway spur will divert traffic west of the current road forming a short piece of motorway joining the M56 with Junction 19 of the M6.  Take a look at the video below which explains the route:

The first part of the project, the opening of the new A556, is due to be completed at the end of March 2017, and according to the website, and as can be seen from the changes to the roads now, they are well on course for that. Follwing the opening the currect A556 will be ‘detrunked’, which means it will go down to two lanes, incorporating a cycle lane and bridal path. All of which will significantly reduce the traffic and the noise from that part of Mere. No doubt that will be a relief to the house owners along that stretch who have had to put up with a bigger and bigger car park every morning and evening.
You can keep up to date with developments of the road here: http://www.highways.gov.uk/roads/road-projects/a556-knutsford-to-bowdon-improvement/

We hope it all goes well and lots of money is raised along the way!