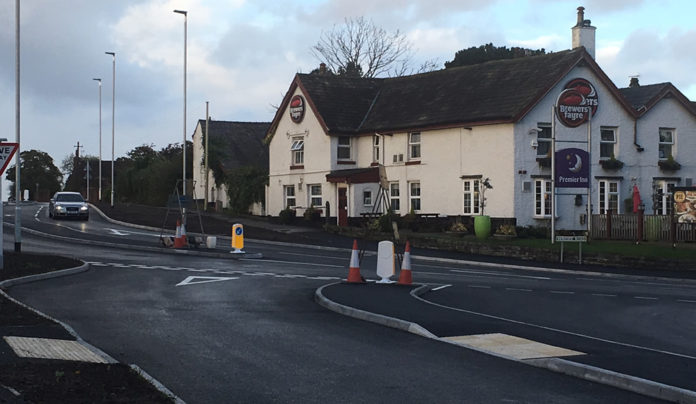 There has been a 1000% increase in traffic through Rostherne, Mere, Ashley, High Legh and Agden because there is no direct route from The Swan Hotel directly into Altrincham. Most people believed that there would have been a road linking the two locations but now that the roadworks are finished all has become apparent. One local Bucklow Hill resident who didn’t want to be named said.

“It’s ridiculous! It used to take me less than five minutes to get into Altrincham and that was with all the traffic at Lymm roundabout! I now have to drive all the way up the new B5569 to the junction with the A50 which is always blocked with really heavy traffic. If there is a queue on the new road because of a crash on the M6 or something then heaven help me!

All I want to do is to toddle into Altrincham and it now takes me 15 minutes on a good day or up to 45 minutes when the road is blocked! To add insult to injury when you try and go down the old road it’s some time before it says ‘No access to A556/Bowdon Roundabout – turn around'”

It’s even worse for the residents of the Crescent Rd estate on Chapel Lane. They are being encouraged to drive down towards the Swan, turn right and up the B5569 to the A50, then travel down the new road in the direction of Altrincham.

The new road has been amazing for the residents of Mere with a huge reduction in traffic with the loss of the accompanying noise but one resident Alan Spiggott is fuming.

“So now I’ve got to go all the way up Mereside Road and turn right on to the A50 which isn’t easy at the best of times. Then if it’s blocked I can be sitting there for 20  minutes. One time there was a crash on the M6 or something and my car was in the queue for nearly an hour! I was only nipping into Hale – I just didn’t think! It’s bloody stupid.”

Thankfully there are alternative routes using the back roads but this has lead to a 1000% increase in village road traffic in the area since the new road was finished.

The Three Alternative Routes To Altrincham From Bucklow Hill

There is a route from The Swan Hotel if you travel down the narrow Ciceley Mill Lane through Rostherne. You drive at 20 through the village so that is why it takes 14 minutes (as opposed to 5 using the old route). You also have to be careful of killer tractors who come flying down the road very quickly. You turn left at Tatton gates, down the Tatton mile. Left at The Greyhound and down Ashley Rd in to Hale. There are often hoards of lycra clad men on bikes who ride three abreast so those tend to slow the journey time as well.

Note that if you are feeling charitable then you could give the Rostherne residents a break, you could go up Mereside Rd and turn left at Ashley Rd opposite Clamhunger Lane and the now defunct VIP cars. That would circumvent the village all together and you would go the whole way alongside Tatton Park.

2. Through Agden from Chapel Lane

This route takes you up past the Crescent Road Estate and over the new A556. You then carry on until you get to Back Lane. There is a sign here saying that there is ‘No Through Route’ but this is a lie and you can turn right here. I don’t know whether it is illegal to send people down a road that says this but as it isn’t true I can’t see what the problem is. You then turn right at Boothbank Lane past the Children’s Adventure Farm (CAFT) and under the M56 motorway. Then follow Reddy Lane in to Little Bollington. You will come out at Lymm Road/A56 so turn right to Bowdon Roundabout.

Whilst this again is a small country road with single track lanes involved particularly when you go past CAFT – it is a viable alternative to being stuck at the junction with the A50. Although it says 16 minutes on the map above it really takes about 12.

There is a quicker route and that involves going down the old road as you would if you were going to Altrincham. Go over the roundabout – the one where a natural link on to the A556 would have avoided all this country driving! and carry on. Then take a left over the A556 down Millington Lane. This is quicker as it cuts out Chapel Lane and Back Lane and joins at Raddy Lane past CAFT, so you still have to take it dead slow – and under the M56. This lands you just right of the Old Stamford Pub on the Lymm road and about a mile from the roundabout: see below 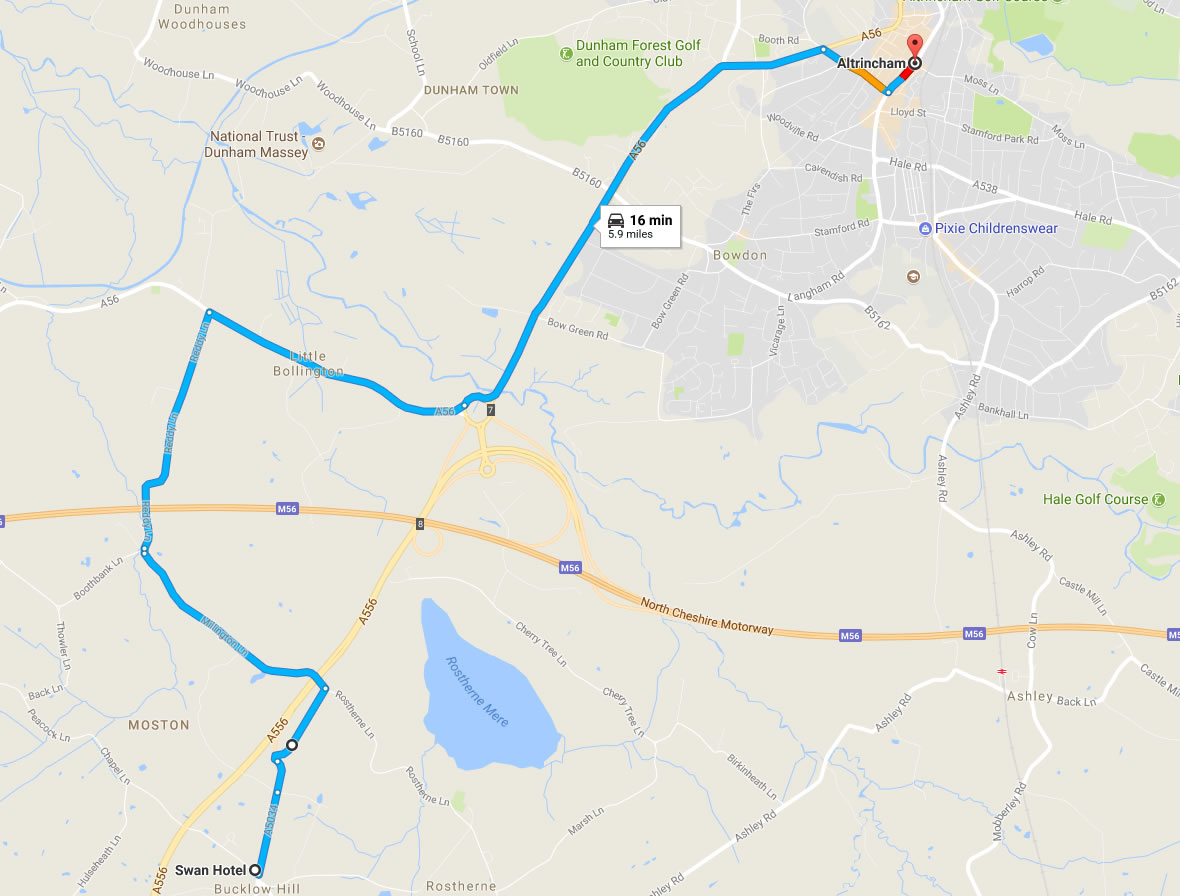 This is actually only a slight diversion from the old route but again country roads are involved so the utmost care must be taken navigating them. Again it says 16 minutes on the map below but try it and it’s way under 10 – I think they added a lot on for when you are in Altrincham.

For goodness sake DO NOT try and continue on down the old A556 because you will end up in Rostherne! A route could be crated this way and there is in fact a narrow bridge off Cherry Tree Lane>Tom Lane>Yarwoodheath Lane but you will just get to a gate on the Bowdon Roundabout which is very frustrating – as you will just have to turn around because it is locked. One day maybe someone will see fit to upgrade those lanes and open the gate who knows?

We have asked Highways England for a comment on the lack of a quick road so will update this post once we have learned more.

This from Highways England – it appears that the residents of Millington opposed a straightforward link which would have directed all the traffic away from the country roads!

“To reassure you junction strategy was fully thought through and discussed at the Public Examination into the scheme which was held in 2014. Consideration was given at that time to a northbound on slip at Millington as suggested in one of the submissions. There was however resistance to this from a local representative group. The final decision from the Planning Inspector, taking into account all the submissions made, was the layout that has now been constructed. All the information from the Public Examination is online and can be found at http://bit.ly/2z239Gl with some relevant information starting at para 5.51.
Highways England cannot deviate from the route that as laid out with the DCO as that is the official planning document.”