There are some places that are just slightly off the beaten track that make them an essential destination venue – one of those is the coolest little subterranean bar in Altrincham, Mort Subite (Place de Bierre). It doesn’t take a genius to work out the subtitle of course, it’s a ‘beer place’ where you would expect to find a good selection of beers, but what is the origin of the odd name? Surely Mort means dead in French? We chatted briefly with Wyn, (pronounced ‘Wayne’), Rhys the affable Welsh owner.

Mort Subite is on the opposite side of the old hospital on Greenwood Street under Riddles bar and the entrance is down the alley on the side which ends in Carlton Place Furnished Offices. Riddles used to be the cafe/play area Callooh! Callay! in the early 00’s and the space that is now occupied by Mort used to be a play area for the kids. We nipped in just after 5 pm for a quick glass of wine (or two!) 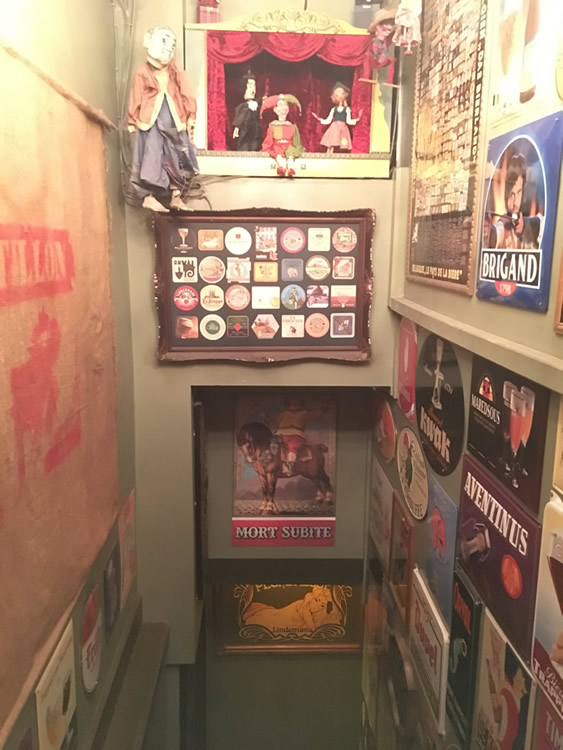 The first thing you notice as you descend the stairway is the small puppet theatre above and the collection of Belgian beer mats, posters and associated ephemera on the walls. You enter the bar through a large heavy curtain in to what first appears to be total darkness. As your eyes adjust you can see that the ceiling is draped with striped brocade with a small bar on the left. There are nooks and crannies where you can sit in privacy, small stuffed birds on the walls, bird cages hanging from the ceiling and various old French beer plaques of excellence adorning the walls. The tables feature antique looking lamps with small candles inside which help to cut through the darkness. In fact you’d swear you’d slipped back a hundred years with the gentle Gallic music drifting lazily from the speakers.

Mort Subite is essentially a North European beer bar and as you sit down, the engaging waitresses are ready with hard backed menus which are jam packed with a huge selection of drinks. There are pages and pages of more than 250 international beers, both on draft and bottled, from Belgium, The Netherlands, Germany and The UK of varying strengths and potencies. 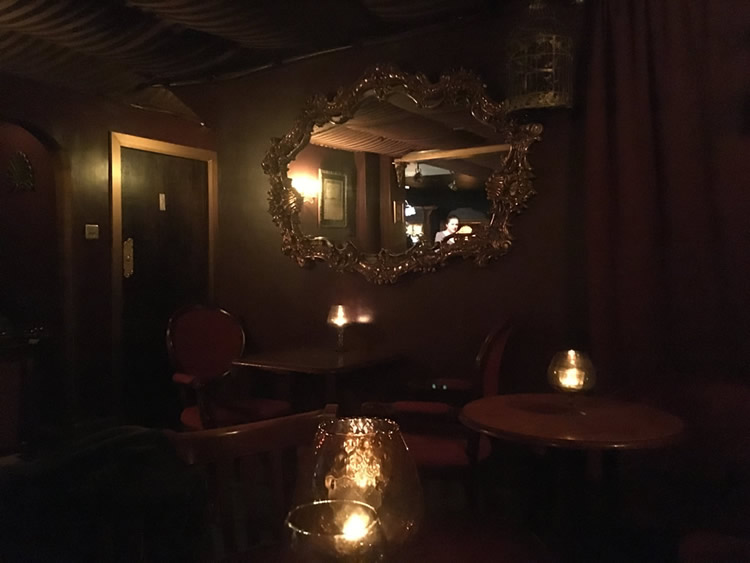 One guest beer, Tactical Nuclear Penguin comes in at whopping 32% proof and is served in small 25 ml glasses – yours for just £5.50! The menu claims that ‘No penguins were harmed in the making of this beer but some humans did get very cold – freeze distilled, dark and very potent’. If you can’t decide then simply ask for ‘Selection de Mort’ and they will bring you a 1/3rd of a pint of three different beers served on a small wooden platter. It’s your choice and from previous experience there are reasonable strength beers of 4 to 6% that are very pleasant, beer that you can really make a night of such as Welsh Pride from Conwy, 4% and the Belgian classic, De Koninck, 5%, ‘Antwerp’s everyday drinking beer’.

Jenever, an intriguing Dutch/Flander’s liquor made from juniper berries is the origin of Gin and comes in a variety of flavours including strawberry, cherry and vanilla. We were drinking wine tonight just for a change and the red on offer, Montepulciano and the Merlot (£3.80 a glass), were really soft and palatable, heightened I guess by the intoxicating atmosphere.

Wyn told me how he opened the award winning Le Trappiste (Now Pi – on Shaw’s Rd), Altrincham’s first Belgian bar, in 2002 and ran it until 2007. He opened Mort Subite in 2008. He also revealed how the idea for the bar came about and of course the origin of that intriguing name!

‘It’s in the style of a Flemish Brown Bar, I was in a Lambic Beer, (A particular type of brewing process), bar in Brussels and it was called ‘Mort Subite’ or ‘sudden death’ in French and whilst I didn’t want to just plagiarise the name it just seemed appropriate.’

‘We are underground so the ‘sub’ bit fitted and this place used to be ‘cold storage’ for the old Altrincham Hospital, (i.e. the mortuary!). In fact this wall goes back a further three feet and it’s where they pulled them out from, (pointing to the outside wall!) – so the ‘Mort’ bit fitted perfectly as well’

If you book in advance the they will bring out a cheese and salami platter to go with your drink selection but either way they will always bring you some nibbles – nuts or crisps on the house.

“When Callooh Callay was here I bet they didn’t know that the kids were playing in the old mortuary!” 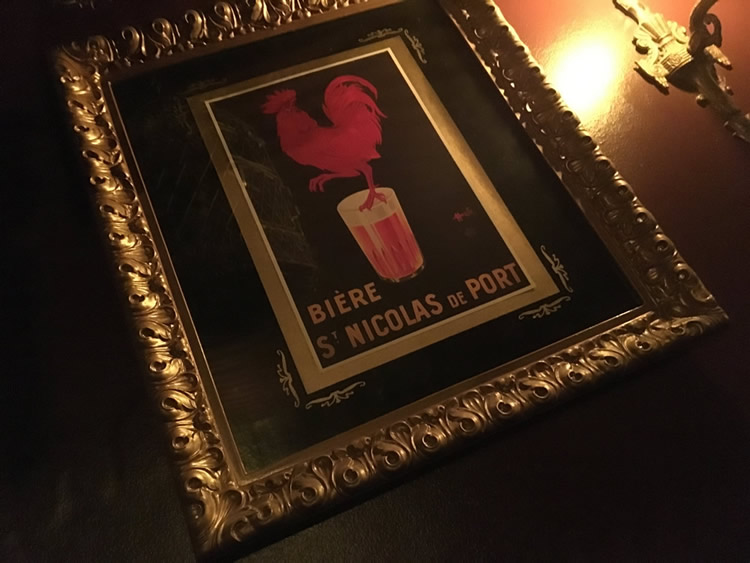 We always enjoy our time in this amazingly curious bar – it’s quirky and original and the owner, Wyn, is laid back and approachable. So next time you are walking down Greenwood Street with your heart set on the hustle and bustle of the Market – take the smallest of detours and enjoy the ambience and charm of this delightful little venue! 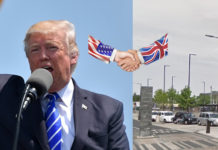 Donald Trump To Visit Altrincham – And We Get A Day Off!