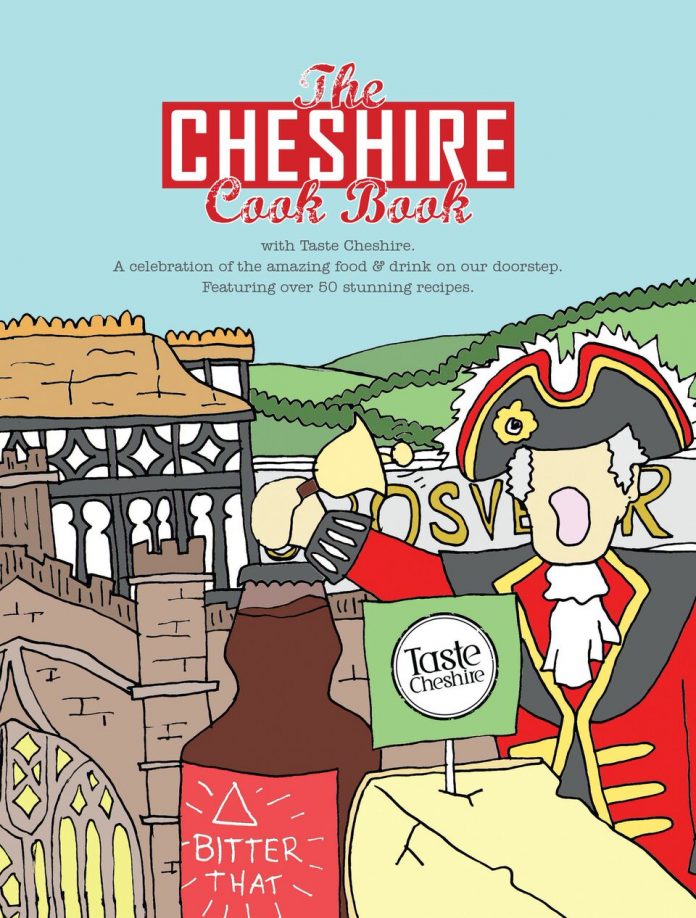 Celebrate the region’s vibrant food and drink scene with The Cheshire Cook Book
The eagerly anticipated Cheshire Cook Book is now on sale, featuring over 50 stunning recipes and stories from some of Cheshire’s finest restaurants, cafés, delicatessens, pubs, producers and suppliers.

The book is the 9th in the ‘Get Stuck In’ series of regional cook books by Meze Publishing, who were recently crowned Best Newcomer at the Independent Publishing Awards.
Simon Radley, the Executive Chef at Michelin star restaurant The Chester Grosvenor has written the foreword for the book as well as contributing his Dexter beef rib, parsley-buttered carrots and onion tarte tatin recipe.

“World-famous cheeses, rare-breed meat, the freshest fruits and seasonal vegetables can all be sourced from within the county, and this book is a celebration of all the people who farm, grow, make, cook and promote them.”

Food lovers are spoilt for choice by the numerous award-winning, fine dining restaurants and traditional country pubs that Cheshire has to offer. The book also highlights local producers and suppliers in areas including Hale, Sandbach, Nantwich, Waverton, Warrington, Tarporley, Northwich and Macclesfield.

Among the venues featured are Harthill Cookery School who won the title of ‘Best small cookery school’ at The British Cookery School Awards. The Chef’s Table who have two AA Rosettes and were awarded first place in Restaurant Magazine’s ‘Top 50 fit for foodies’ as well as the gold award for ‘Best small restaurant’ and silver award for ‘Best use of local produce’ at the Taste Cheshire Awards have also contributed their prawns in two parts recipe. Yu was voted one of 2016’s best Chinese restaurants by The Legacy of Taste and the Great North Pie Company has won countless awards over several years including ‘Supreme champion of the British Pie Awards 2015’.

“It’s amazing to be included in a cookbook that showcases the best food and drink that the Cheshire region has to offer. We at Willington Hall are all very proud to be a part of it.”

You will also see contributions from Chime, The Stockyard, The Garden, Rolando’s, The Brew Foundation, Salt Bar and many more – readers will be sure to spot one or two of their favourite eateries, as well as find a few new haunts.

With a carefully selected collection of diverse recipes achievable by all home cooks, from The Clink Restaurant’s trio of apple to DeFINE Food & Wine’s penne with Tuscan sausage, The Lord Clyde’s jaffa cake, The Little Deli Company’s cheese and chorizo croquette balls and Joseph Benjamin’s Isle of Man queen scallop with garlic and parsley – there’s something to whet everybody’s appetite.

The Cheshire Cook Book retails at just £14.95 and will be available soon in all of the businesses featured in the book as well as select local gift shops, book shops including Waterstones and online at www.amazon.co.uk.

This is one of our personal favourite recipes as it incorporates cheese from three different countries and is unbelievably moreish. It makes a fantastic starter or small plate and is simple to prepare! 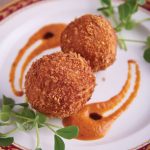 Lightly fry off the cooking chorizo in a pan with a little olive oil. In a separate bowl, mix the rest of the ingredients together, except for the cornflour, egg and panko breadcrumbs. Mould into 40g balls with your hands and add 1-2 cubes of the cooked chorizo into the centre of each. Roll the balls into the cornflour. Dip the balls into the beaten egg and roll into the panko breadcrumbs. Deep fry in vegetable oil for 3-4 minutes until golden in colour with a crispy breadcrumb outer. Serve with a rocket salad and chilli-infused tomato coulis.