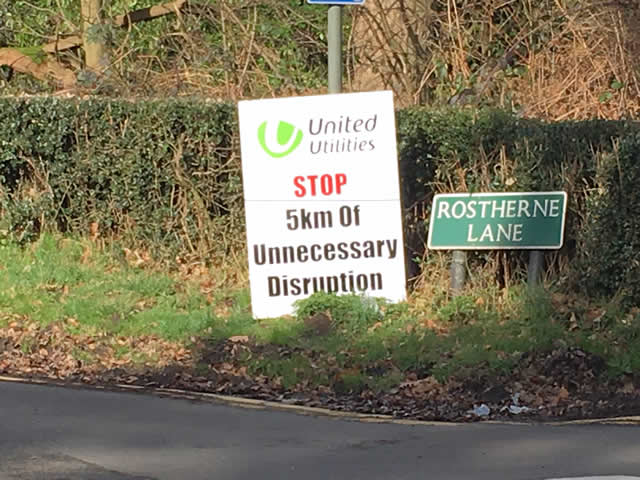 Rostherne is up in arms after work started today on a £9m scheme to boost the water quality in Rostherne Mere. On EXACTLY the same day that the new A556 road has opened, causing mayhem for homeowners, businesses and drivers in the area!

United Utilites unveiled the project in 2014 and revised the route of a new sewer pipe to avoid the environmentally sensitive areas of Rostherne Mere in October 2016. The problem of course is that now work has started on the same day as the disruption caused by the new road opening!

Whereas drivers could always go down Cicely Mill lane to the the Tatton Park gate, now Rostherne Lane is completely blocked. This means that residents and business owners will have to go on a 5km round trip through Mere along Mereside Road before doubling back down the Tatton Mile/Ashley Road. The only other option is to carry on to the A50 to join the new road and then doubling back down the new A556. Either way it’s huge headache to get to Altrincham.

The entrance to Tatton Park is still accessible in both directions but there is no longer a cut through from Rostherne Lane through to the A556 at The Swan Inn.

One has to question the sense of planners from both Highways England and United Utilities for allowing this disruption on the day the new A556 is revealed.

You can read more about the scheme, which is dubbed a ‘Vital project to improve a site of special scientific interest’ here: