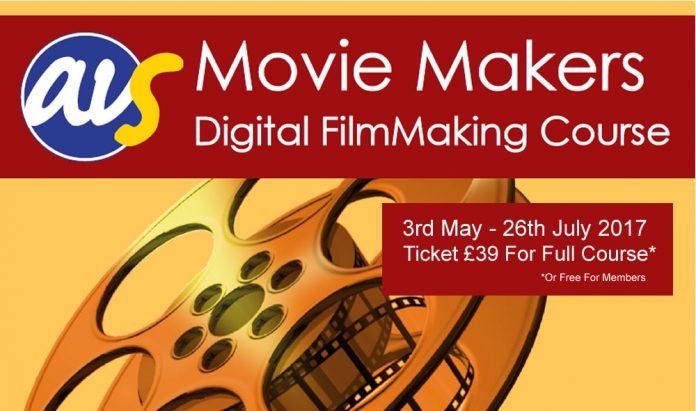 Award Winning Club to re-run their course on Film Making.

Altrincham Video Society – AVS MovieMakers will be re-running their Digital Filmmaking Course for beginners starting on May 3rd 2017. Originally delivered in September last year, it was so well received that the organisers have decided to run it all again later this Spring.

The course itself is described as “A fun and informative MovieMaking course for Beginners” covering all aspects of filmmaking including:

The club started life as Altrincham Cine Club above The Frying Scotsman fish and chip shop in Timperley Village in the 1960s and is now located at the Timperley Community Centre on Park Road.  The only original founding member is Graham Winnnick who along with Eric Flowers at the grand old age of 82 are the club’s longest serving members. The club came second in the North Vs South Video Competition.

AVS MovieMakers is a film making club with a pedigree going back to the days of cine film when nothing could be viewed until it had been properly developed. Over the years they have received numerous awards from all corners of the world including best film awards in the USA, Canada and Australia.

Affiliated to the Institute of Amateur Cinematographers, the club have always promoted the idea of ‘creative movie making’ and are always ready to put their technical and creative knowledge and experience at the disposal of those who are still learning their craft.

“Most people have old films of the family stored away in a cupboard somewhere which are rarely seen. Our aim is to give people the proper skills and understanding to make better films. Films that can be enjoyed as opposed to tucked away.

If you own a camcorder or indeed any kind of video recorder and feel that you want to use it to make better films. If you are totally new to filmmaking and are looking for help and advice on what to buy and how to use it then it’s all covered in this course.”

Although the training is aimed at beginners a lot of the content is designed to offer the skills to produce advanced results that will maximise the enjoyment of both yourself and your audience alike.”

The training itself is delivered in 7 separate Modules run on alternate Wednesday evenings over a 13 week period from Wednesday May 3rd 2017 through to Wednesday 26th July 2017. It costs £39 to attend the entire course which also includes a 50+ page accompanying handout document. IT fee for members and membership costs just £65.

The course is run from 3 May every two weeks at a cost of just £39 – If you are a member of the club or would like to join for £65 a year then the course is completely free!

Anyone interested in attending can book on Eventbrite via the following link:
https://www.eventbrite.com/e/digital-filmmaking-course-tickets-33230700921