With it’s ever changing fascias Altrincham is virtually unrecognisable from the late 1990’s never mind the 1890’s, but sneak out a little further from the once bustling town centre and you will find a gem of a shop that has remained almost unchanged in over 117 years.

Currently owned by Geoff Swain, the Shoe Repairers on Woodfield Road, Broadheath has been in business continuously since it first opened its doors soon after being built in 1888. Geoff will be retiring early in the new year and the shop will sadly close its doors for good which will be a huge loss for the town especially as he has been running it single handedly for more than 32 years.

Hale and Altrincham Life caught up with Geoff for a remarkable chat – we took our official photographer along who took these amazing pictures of the place exactly as the shop stands now, as a working museum.

The first thing you notice when you enter is the pure simplicity of the place, no fancy neon signs or promotional material, just a counter with some finished shoes behind and our host, the proprietor, wearing his trademark blue work coat and a big smile. ‘Come through’ he says as we make our way round the back amongst the material swatches, random soles, half finished shoes and various menacing looking pieces of machinery.

Geoff tells me a little about how he started in the shoe repair trade:

‘It’s 60 years now, because I went from school straight to Timpsons on Lloyd Street in Altrincham where Hidden Hearing used to be. Timpson had three shops, one Railway Street, one George Street and the one on Lloyd Street which was the repairers. Anthony Timpson, John Timpson’s (The current owner), father took me on at the time, he was a smashing bloke just like his son. There was also a bloke called Charles Noakes who was running the shoe repair side at the time with Michael Franks who lived in Mobberley.’

There was a time when Altrincham had more than it’s fair share of shoe shops – there are old photographs showing that Freeman Hardy & Willis had a shop on railway Street and who can forget the big Dolcis in the town centre? There was also an old style shoe repairers on Regent Road opposite where Stolen From Ivor used to be and Geoff remembers it well.

“I remember Rushdens, run by a fella called Jim Armstrong, they didn’t have many shops, just 2 or 3, in Stretford, Sale and Altrincham, but Timpson had a big chain so they struggled a little bit and Timpson paid better wages at the time’

After working for the Timpson family for nearly 28 years Geoff saw his chance to move on by acquiring the business on Woodfield Road.

“I was working for Timpson in Knutsford at the time and we always charged quite a high price for mending shoes but I didn’t like some of the materials they were using so I left. I told Michael Franks I was leaving and he called me in for a chat. He gave me some good advice – ‘Just make sure that the man’s not in debt because you will be taking it over’, and I said ‘OK’ – but I’d already had a chat with Harry Howitt who owned the shop at the time because I knew him from going to the football. I was a Broadheath lad and I knew that he was straight as a die. He’d have been about 70 odd when I approached him – Someone told me he was going to close it up, it must have been the early 80’s.’

Geoff shows me a leaflet that had been written for the Altrincham History Society Journal which charts the ownership of the premises from 1888 with a photo from 1906 showing ‘Mr Dawson’s Boot Mending Depot’ which would have been in high demand at the time with the booming industrialisation of Broadheath.

‘After a while we had to change things with a contract which said that if ever he should want to leave the place would I buy it? and I agreed. It might only be a month’s notice and when he eventually wanted to move, I bought the place. He was 90 and he came to me and he said ‘Geoff, I’m moving out’ and we agreed I would buy within 6 months. We just agreed and he said ‘as long as you are going to buy it it’s OK’. I’ve still got the contract in my drawer! – and I bought the building for £23 thou’

‘I told a solicitor what we were doing and she said ‘where’s your contract and I said what contract? I just shook hands with this bloke and that was it! She said ‘No! You don’t do that’ and I said ‘well I’ve already done it!’ When the contract came back from the solicitors it was this thick (holding his fingers 4 inches apart), and we threw it in the bin. Harry said ‘look Geoff we know what’s in it so lets just shake hands’ and we did. He paid all the bills, mine and his – he was a fantastic bloke, straight as a die. You didn’t upset him though!

With Geoff retiring there is no one to succeed him – ‘My lad won’t take it over’ he explains, I really can’t make my mind up, do I keep it with the flat above which I rent out or do I sell the whole building? Do I give it a good clean and rent it out the flat again and get rid of the shop?, but the only person interested just wants it for storage’. I keep thinking what to do next’.

He gives me a little inkling of the key to his long success:

The workroom side of the shop includes his well worn work bench, battered, gouged and pitted, it honestly looks like it had been there for the whole duration! There is an an array of sole fixing machines and unlike other shoe repairers he has the ability to stitch soles in place if required which means that people come from miles around to use his services. ‘This lady came to interview me from The Lowry,

‘I gave her some heels with ‘WD’ on them for ‘War Department’, they’d been here since then!’

He shows me some of the machines: ‘That’s a sole stitching machine, an FS and that’s a Blake machine – the thing is I do do things properly, I stitch the soles on from the outside but when we do a Blake stitch that goes from the inside of the shoe’. He shows me some examples of the amazing job he does of attaching leather soles in this way.

‘That’ll cost him £55.00 when he comes back in’, he explains showing me a pair of Barkers shoes he’d just finished. ‘I still do proper shoe repairing using the right machines’

I ask him what he would do after retirement – ‘well I bowl and I used to bowl down here when it was Budenburgs’.

It will be a very sad day when this Altrincham institution closes its doors for the last time. It really is like walking back in time – the smell of leather, oil and machinery. Geoff adds as we leave the shop in to a wet Altrincham afternoon, ‘People can’t buy a decent belt these days – they buy plastic and it has a spray of leather smell on it. I have one and it has printed on it ‘1949’ and every so often I put a bit of polish on it and it’s the best belt you’ll ever buy’

H&A wish Geoff all the very best for a long and happy retirement!

Do you run a business in Altrincham that has a long and interesting history? If so, get in touch. We love writing about the history of Altrincham and the surrounding area, creating pieces which will enrich the lives of those reading in the future.

All images on this page are copyright© David Gleave at Northernfacephoto – please do not reproduce any of them without his express permission. 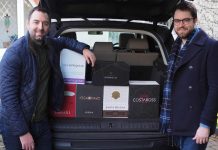 Friends Of Wine – New Hale Business – Born Out Of Lockdown